New Zealand Oil & Gas has received final High Court orders approving a return of capital by way of a scheme of arrangement under Part 15 of the Companies Act 1993.

On 20 March 2017 New Zealand Oil & Gas announced that it had received initial orders from the High Court to seek shareholder approval to return $100 million of capital to shareholders.

New Zealand Oil & Gas held a special meeting of shareholders on Wednesday, 12 April 2017 to vote on the proposed capital return. The resolution was carried with approximately 99% support of those who voted on the scheme.

The company has also received a favourable binding ruling from Inland Revenue confirming that the proposed return of capital will not be treated for New Zealand tax purposes as being in lieu of a dividend. Further details on this ruling are available in the company's announcement on 13 April 2017.

The scheme will involve cancelling one out of every two ordinary shares for a payment of NZ$0.62724388 per cancelled share – effectively returning the equivalent of approximately 31.4 cents per share to every holder of ordinary shares. Payments will be made within five business days of Friday, 12 May 2017, which is the record date for determining the entitlements of ordinary shareholders to participate in the scheme.

In total, shareholders will receive NZ$100 million. Part-paid shares issued as part of the company’s Employee Share Ownership Plan will not participate in the scheme. 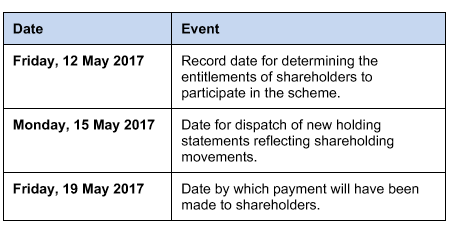