The date when some partly-paid shares in the New Zealand Oil & Gas employee share ownership plan can be exercised has been brought forward.

The date-change results from a determination that changes in New Zealand Oil & Gas shareholding amount to a change in effective control of the company as defined in the employee share ownership plan rules. The determination triggered a requirement to notify participants in the scheme of their rights.

Under plan rules, eligible staff have been able to pay 1 cent per share for shares that have then been held in escrow by NZOG Services Limited for a minimum of two years. Partly-paid shares are issued at a 20 per cent premium to market.

New Zealand Oil & Gas has determined that the various companies that make up Zeta Associates now collectively hold or control more than 20 per cent of the voting rights in New Zealand Oil & Gas, and this determination has triggered rights under the plan for owners of partly-paid shares. The two-year restriction on exercising the option will not apply and participants may exercise their options at any point until the final date when the option expires.

3,911,000 partly-paid shares will now be eligible for release from escrow even though two years has not elapsed. Of this total, 2,911,000 were issued in September 2015 and September 2016 at a price lower than yesterday's closing price.

Employee share ownership plan participants may, at their option:

• Maintain the current status quo; Or
• Pay up the full issue price of their partly-paid shares immediately, in which case full legal title in those paid-up shares would be transferred to them; Or
• Require the trustee to sell their partly-paid shares and forward the net proceeds of sale (that is, holders get the difference between the sale price and the balance of the issue price outstanding.)

A breakdown of the affected shares is attached on the next page. Consultation with holders of the majority of entitlements in the plan indicates that holders intend to maintain the current status quo.

Of the 6,622,000 securities held by employee share ownership plan participants, 2,911,000 were issued at a price below yesterday's closing price. 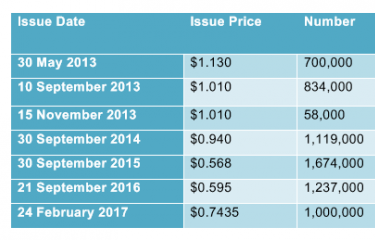 A total of 8,420,000 million shares are held by NZOG Services Limited, having been issued under the employee share ownership plan. However, this figure includes 1.798 million shares forfeited by their holders.