The right to explore for 'unconventional' oil and gas resources in Central Sumatra, Indonesia, has been awarded to a consortium in which New Zealand Oil & Gas holds an 11.25 per cent interest.

Central Sumatra is one of the major oil producing basins in South East Asia. The MNK Kisaran production sharing contract covers a substantial sub-basin in the same area as the conventional Kisaran production sharing contract where the consortium partners last year successfully drilled for oil and gas. A plan of development for that discovery is currently being prepared, and is expected later this year.

Unconventional resources are those where substantial volumes of oil and gas are believed to be trapped in rocks, but the rate of production is severely limited by low permeability.

Commercial development of some of these types of rock has been made possible by new extraction technology, particularly in North America.

The consortium will study the effective application of these technologies in onshore Sumatra over the next three years. The first firm, three-year exploration work commitment includes geological and geophysical studies in each year and drilling a vertical exploration well in year three. 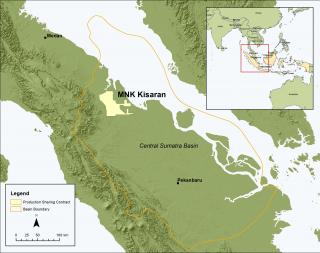