Oi-1 is a vertical well in water depth of about 120 metres. It is expected to take around 30 days to drill to a planned total measured depth of 3,881 metres.

The operator estimates gross drilling costs of USD27 million (New Zealand Oil and Gas share USD5 million). New Zealand Oil & Gas considers the well has a 17 per cent geological chance of success, and a 16 per cent chance of commercial development.

If the results of the Oi-1 exploration well indicate the presence of a hydrocarbon-bearing reservoir, the joint venture may decide to drill a sidetrack hole to provide additional information to assist with the determination of resources and viability for any future development. A sidetrack would be drilled on a full equity share basis (i.e. 27.5% to New Zealand Oil & Gas). It is expected that a commercial discovery would later be tied back to the Tui production facility, the FPSO Umuroa.

Resources in this statement have been evaluated using a probabilistic methodology. The estimate of prospective resources referred to in this statement is based on, and fairly represents, information and supporting documentation prepared by New Zealand Oil & Gas Vice President of Operations and Engineering Andrew Jefferies (B Eng Mech Hons, Msc Pet Eng, MBA), a Society of Petroleum Engineers Certified Petroleum Engineer who has over 23 years of industry experience, and reflects and summarises the most current information supplied by the joint venture operator.

The estimated quantities of petroleum that may potentially be recovered by the application of a future development project relate to undiscovered accumulations. These estimates have both an associated risk of discovery and a risk of development. Further exploration appraisal and evaluation is required to determine the existence of a significant quantity of potentially moveable hydrocarbons.
BACKGROUND TO OI

The Oi well is northeast of the producing Tui area oil fields within the same Petroleum Mining Permit. Tui production currently comes from three distinct accumulations within the fields - Tui, Pateke, and Amokura. The Pateke-4H well this year confirmed further resources, and it will be tied back to Umuroa for production in 2015. If successful, Oi would be an expansion of the Tui fairway.

The well objective is to evaluate the hydrocarbon potential of a 4-way dip closed structure similar to the producing Tui, Amokura and Pateke fields and it will target the same F10 reservoir sandstones.

Oi-1 is the next structure north of Tui with sufficient estimated potential size to contain commercial amounts of hydrocarbons. New Zealand Oil & Gas believes several possibilities exist for charge into the well, so the main uncertainty is whether Kapuni F10 reservoir sands are present. As the seismic signature over the Oi prospect is different to that over the producing Tui fields, the company believes there is uncertainty in the quality of the reservoir and whether it is present.

Pan Pacific Petroleum increased its participation in the Oi exploration well to 50 per cent under the sole risk provisions of the Tui Joint Venture Operating Agreement.

In October last year New Zealand Oil & Gas increased its interest in the Tui fields from 12.5 per cent to 27.5 per cent when Tui joint venture partners purchased an interest in the field previously held by Mitsui. AWE and Mitsui had opted to participate in Oi at a reduced interest, so as a result of purchasing Mitsui’s interest both New Zealand Oil & Gas and AWE will participate in the Oi well at equity levels lower than their equity in PMP38158. The partners have the option to restore their full equities in any development subject to reimbursement of pro-rata costs and payment of a buy-back premium. New Zealand Oil & Gas has further exposure to Oi through its 15 per cent holding in Pan Pacific Petroleum.

The joint venture partners in the Oi exploration well are:

The joint venture partners in PMP 38158 are: 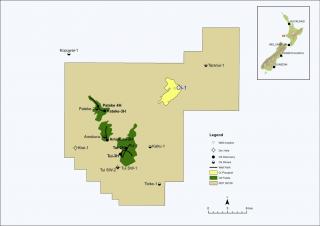 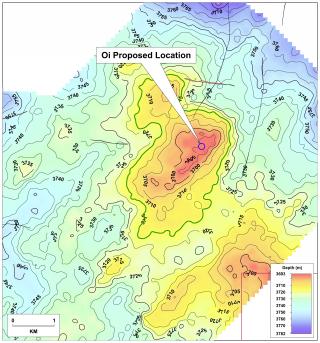