Pateke-4H is a northern extension of the existing Pateke reservoir in the producing Tui area oil fields, approximately 50km off the coast of Taranaki, New Zealand, in water depth of about 124 metres.

Pateke-4H is expected to take around two months to drill to a planned total measured depth of 5,361 metres, including a 1,271 metre horizontal section.

The operator’s pre-drill estimate is of an un-risked 2C Contingent Resource of 2.5 million barrels for the joint venture, or 687,500 barrels net to New Zealand Oil & Gas. (The resource information was estimated using a deterministic methodology, based on the Pateke reservoir simulation model and the evaluation is current. This report is based on information compiled by Andrew Jefferies, Vice President of Operations and Engineering at New Zealand Oil & Gas. Mr Jefferies is a Society of Petroleum Engineers Certified Petroleum Engineer.)

In the event that commercial volumes are discovered the well will be completed and later tied into the existing Tui production facilities. Production of first oil would be in the first half of 2015 or later In October last year New Zealand Oil & Gas increased its interest in the field from 12.5 per cent to 27.5 per cent. The other Tui joint venture partners are: AWE Limited 57.5% (Operator); and Pan Pacific Petroleum 15%.

Pateke is one of three separate accumulations of oil developed in the Tui Area Oil Fields - Tui, Amokura and Pateke.

GEOLOGY
The Tui oil accumulations are in Kapuni-F sandstones, deposited during the Paleocene epoch 66 to 56 million years ago in the 'Kapuni' shoreface (shallow marine) fairway. The reservoir is at a depth of around 3,650 metres subsea.

Organic-rich shales and coals of the Late Cretaceous (145 to 66 million years ago) and Paleocene are the likely sources of the oil. The oil may have orginated from a source kitchen deep within the Taranaki basin, possibly the East Maui Graben to the east of Tui. Vertical migration occurred through faults and fractures and then laterally via sandstone carrier beds, finally accumulating in Paleocene sandstone reservoirs within structural trap closures.

PATEKE-4H
The aim of the Pateke-4H well is to explore a northern extension of the Pateke lobe that geologists believe may not be fully exploited by the current producing well, Pateke-3H.

The theory being tested is that the reservoir in the Pateke structure is separated into two areas, and that Southern area was drained by the 3H well in the early stages of the Tui development, while the northern may not have been and is the target of the 4H well. (See diagram)

The well will be drilled horizontally because the reservoir is thought to be over 1000 metres wide but less than ten metres deep, which reduces the ability of a vertical well to recover efficiently. 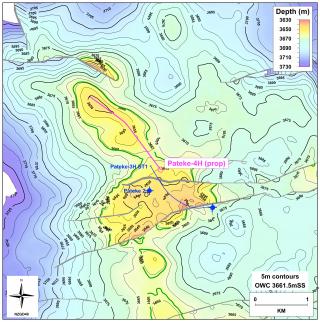 DEVELOPMENT OF THE TUI OIL FIELDS

The Tui-1 well, drilled in February 2003, encountered a 10 metre oil column in excellent quality reservoir. A marine seismic survey was carried out over 250 square kilometres in April 2003 to delineate the Tui field accumulation and other nearby structures.

Production from the Tui fields began on 30 July 2007 and is expected to continue until around 2020. To date the field has produced over 30 million barrels of oil.

The Tui development comprises four horizontally drilled and subsea completed wells. The extended horizontal production sections in the oil reservoirs range from 819 metres to 1,850 metres. Each is tied back to a leased Floating Production Storage and Offtake (FPSO) vessel, the Umuroa. In May 2008 an agreement was signed extending the charter of the Umuroa through to 2015, with one year rights of renewal until 2022. 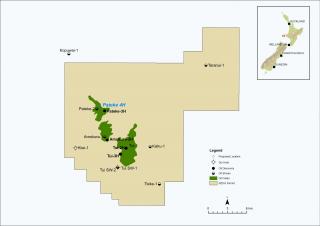